You are here: Home / Infographic / Who are America’s Top Immigrants?

A growing number of people from around the world continue to migrate to the United States of America. Being the land of opportunity, it has become a magnet to young people aspiring to earn a better living and help their families back home. In fact, it is a leading destination of immigrants that now have reached 41.3 million as of 2013, according to the Migration Policy Institute.

The arrival of immigrants in the U.S. has been recorded since 1819. This was after Congress passed a law requiring such move as the country needed immigrant workers.

Of the total U.S. population, 13 percent are foreign-born immigrants. Their number reached its peak from 1890 to 1920 based on data from the 2011 American Community Survey and 2008 Yearbook of Immigration Statistics. From the year 2000, their population further went up by 30 percent.

“People migrating to the U.S. are either the legal and undocumented ones,” according to Kerry Yianilos, a visa attorney. With regards to the so-called illegal aliens or those who are not documented, there are an estimated 11.1 million of them. Reports have it that some 40 to 50 percent of them entered the country legally but overstayed even after the expiration of their visas for 10 years or even longer.

Of the 50 U.S. states, California has the most number of immigrants at 10.2 million or 25 percent of all immigrants. Following behind are New York, Texas, Florida and New Jersey.

The Mexicans or so-called Latinos are the top immigrants in the U.S. As of 2013, they made up 28 percent of the total foreign born population in the U.S.

The Indians from Asia are in second place followed by the Chinese from Hong Kong. Filipinos account for four percent putting them in fourth place. Other nationalities include Vietnamese, Cubans, Koreans and those from El Salvador, Dominican Republic and Guatemala.

The trend today differs from the 1960s when Europeans made up a large number of immigrants in the U.S. At that time, the Italian-born accounted for 13 percent of all foreign-born followed by those born in Germany and Canada.

With the new laws now in place, undocumented immigrants are now protected and can enjoy legal residency for three works. They can also avail of a work permit, low-cost auto insurance, student loans, legal representation and apply for a driver’s license. Another significant law that will take effect in 2016 will allow immigrants in California to apply for a professional license. This covers doctors, nurses, accountants, real estate agents, pharmacists and beauticians among others. 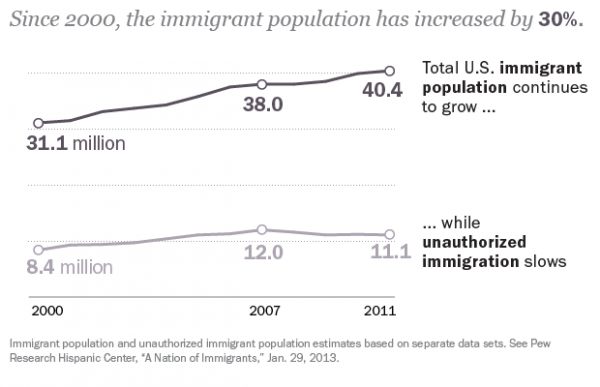