You are here: Home / Infographic / What You Should Know About the Vault in Fallout

Fallout is a popular role-playing video game with a retro-futuristic setting. This game takes place after a global nuclear war sometime in the middle of the 22nd century through to the 23rd century. Its popularity has, in fact, resulted in several sequels and spin-off games that form part of the Fallout series.

Now owned by Bethesda Softworks, Fallout is considered as the successor of the role-playing game Wasteland released in 1998. Just recently, the latest sequel was launched during the first-ever Electronic Entertainment Expo or E3 but it will be officially released in November including versions for Xbox One, PlayStation 4 and personal computers. The same event launched the free Fallout Shelter spin-off game for iOS in the App Store.

Bethesda has developed several role-playing video games that have attracted a large fanbase. These include Skyrim and Fallout, both of which are pitted against each other resulting in the Skyrim vs Fallout rivalry.

Unlike Skyrim that features dragons and a funny twist that allows yelling to kill people, Fallout focuses on people and high-tech weaponry. For many gamers, Fallout is more engaging with a great soundtrack to accompany the game.

In Fallout, the Vault is where the you as the player or the so-called lone wanderer are born and raised singlehandedly by your father. The father, however, eventually leaves the Vault when you become a teenager prompting the player to leave as well especially when the Overseer attempts to arrest him or her.

After leaving the Vault, the player is then called the Lone Wanderer. He or she then goes to the Capital Wasteland in Washington D.C. to search for his father and ventures into other areas such as the Project Purity facility, Rivet City, Megaton settlement and a lot more.

Get to know more about Fallout’s Vault 101 and Wasteland in this infographic. 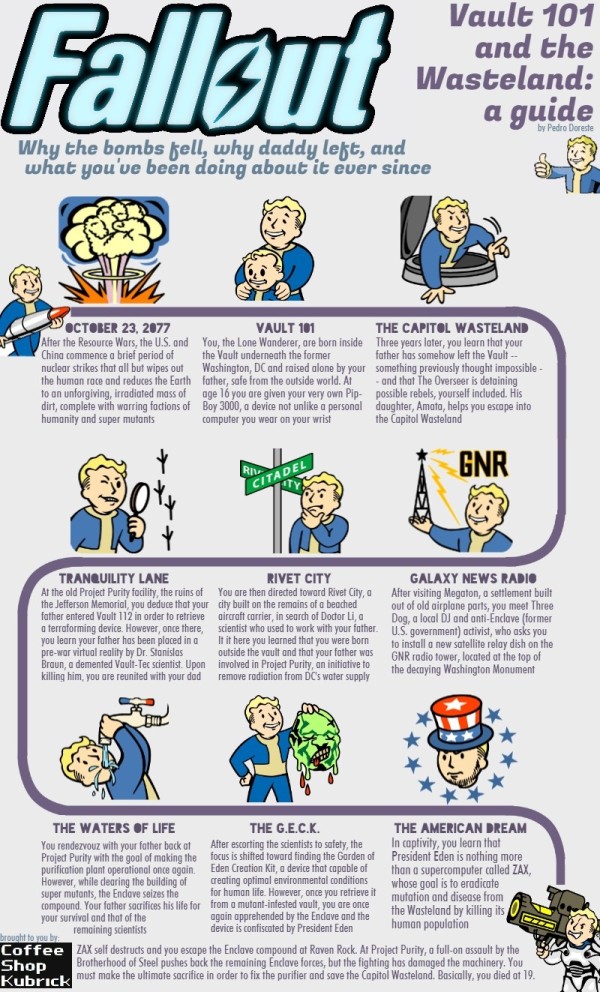